Water for the Congregations in Benin 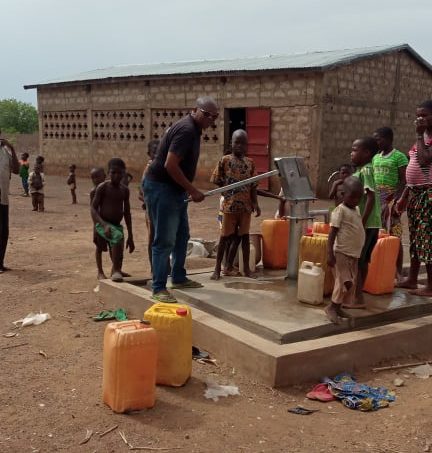 A few months ago, Chad Thompson, a representative of the Walk for Water program through Healing Hands International, asked if there was a need for a well for a congregation in Benin. The Henderson Church of Christ in Henderson, Tennessee had a “Walk for Water” planned and was wanting a place in need of a well to benefit from this effort. After discussions with the Director of the Bible Training Center (BTC), Inoussa Adjayi, it was determined that there were congregations in need of water who currently do not have access to water. Adjayi provided a prioritized list of those congregations that were established with the assistance of BTC graduates. The list was presented to staff members of Healing Hands International, and it was determined that efforts would be made to drill a well for one of those eight congregations if at all possible. A few days following that decision, following a presentation in Texas about the good work of the BTC in Benin, supporters of the work asked if there were any specific needs. The problem of getting to a source of good water was brought up and how those efforts were being made to provide access to water where a congregation was located. After that meeting a call was received from Healing Hands International indicating that a donation had been made that was probably sufficient enough to drill wells at each of the sites provided by Adjayi. Congregations of the Lord’s church, brothers and sisters in Christ, who did not have access to a good water source, were going to be able to drink from wells provided by their brothers and sisters who heard of their need. The words of our Lord in Matthew 25: 34-35 immediately come to mind, “Then the King will say to those on his right, Come, you who are blessed by my Father, inherit the kingdom prepared for you from the foundation of the world. For I was hungry and you gave me food, I was thirsty and you gave me drink, I was a stranger and you welcomed me.” The wells will no doubt be a source of encouragement to the congregations, but also serve as a wonderful evangelistic and benevolent outreach to those in need of the Gospel of Christ. This is just one example of the great good that can be accomplished when brothers and sisters in Christ are working together.