The Joy of Benin 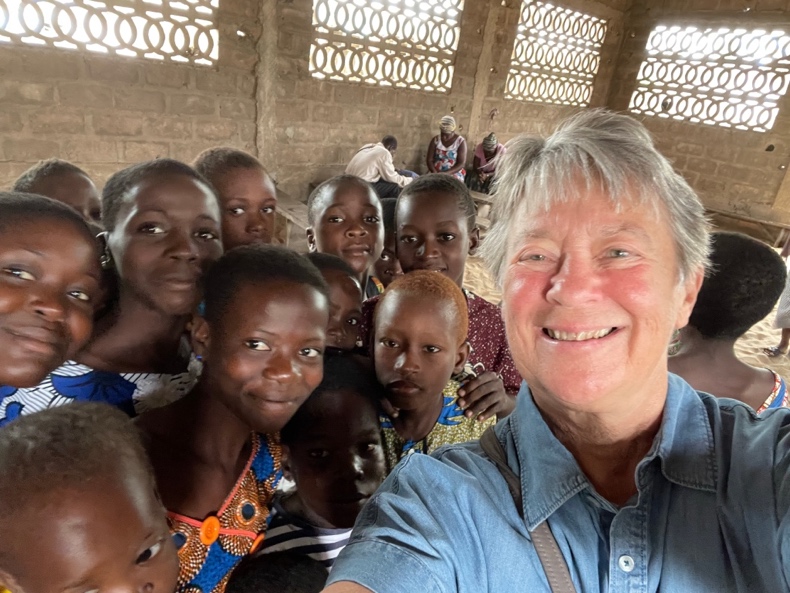 I’m not sure anything else has been going on in the world. It’s been like being taken to another part of the world where I have no contact with what’s going on in America. No news and no obsession with what or where our next meal will be. We arrived at the guest house late Saturday, and after a short 5 hour sleep, we got up early to drive the hour long trip to church. The church is in a village: Tori-Cada Zoungouda.

I suppose I should confess that being at a worship service in Africa is slightly more exciting than one at home. Actually, it’s a lot more exciting. The PowerPoint and worship bulletin are a chalkboard with attractive chalk graphics embellishment. The communion is served in trays. The pews are wooden benches with no backs on them, and the members sit straight while listening to the lessons and sermon. The energy and enthusiasm is evidence of the joy they have in praising God.

God is praised joyfully throughout the service. When someone prays, everyone says, “Amen.” When the speaker wants to get your attention, he says “Hallelujah,” and everyone responds with an enthusiastic “Hallelujah!” At home in church we have been studying joy and Philippians. I think after worshiping here with brethren who are in what most of my friends might describe as uncomfortable surroundings and feeling the joy they have, I understand a pure JOY.

The children sit together on benches, with 10 to 12 on a bench. They sit quietly and respectfully. There’s a lady and man who circle around them making sure they behave. They carry a switch to tap them if they start to fall asleep. If one becomes uncomfortable they pick him up and take him to the parents. There were a few children who had reached their limits of being quietly still and those were sitting outside, under the watchful eye of a parent or an older sibling.

The singing is amazing. I can’t describe it except to say it’s enthusiastic, energetic, emotional and full of joy. It is a joyful happy sound that I don’t know the words to, but I can understand it’s about being happy to praise God. At one of the churches they sang as we left and followed us out of the building, taking us to the new building under construction. They crowded around  us singing.

I am amazed at the strength the women in Benin have as they help the church to grow. They continue in the faith despite adversity at times. They are Esthers, Priscillas and Lydias. And when this old world starts to look dark to me, I’m going to remember there’s a light shining today somewhere in Benin in Western Africa.

The children’s Bible curriculum and literature is given to teachers and the children as a way of introducing basic truths that we read in the Bible. This material is made available for free on the French African Christian Education website in PDF format. The literature is available in French, Spanish and English to anyone, anywhere who would want to use the texts.

On Wednesday and Thursday we went out to see church buildings and visit with members in villages outside of Cotonou. We met preachers, families and children. On Thursday I met a Christian lady who had a beauty salon, and 22 years ago she helped begin a church in her village. It’s in western Benin near Togo. Her name was Luciana, and she reminded me of Lydia. And when we met I tried to encourage her; I told her she was an Esther helping to save her nation. The preacher at her congregation is Joel. He preaches every Sunday with no financial support. The building is on a dirt road in the middle of a field surrounded by corn, other crops and goats.

As mentioned, more about the recent trip to Benin will be presented in future newsletters. Please keep these brethren, and all fellow Christians around the world, in your prayers as they continue in the Lord’s work.